In commemorating the Great War, few now remember that most bitter battle on the home front - the war of words over conscription. But it was hugely important at the time, dividing the nation as never before.  Thousands of impassioned speeches, endless newspaper columns, mass meetings and huge rallies were held around the country, against a backdrop of mounting casualty lists from the front. At times it seemed as if the soul of the grieving nation would tear itself apart. Food riots and a general strike threatened industry and public order, testing Australia's democracy as never before. There were those who wondered whether Australia was about to go the way of Bolshevik Russia. And the domestic political ramifications of the bitter political debate continued right up to the Second World War, with the Australian Labor Party out of office federally (apart from a very brief interlude) until 1942.

There were groups within the campaign against conscription who also opposed the war itself. Pacifists like Vida Goldstein argued that nations should arbitrate their differences, without resorting to violent conflict.  Socialists like the Industrial Workers of the World believed that war was waged by capitalists in their own interests, sending workers in their thousands to their death. But it seems that most of those who voted against conscription did not necessarily see it as a vote against the war itself. Just seven months after the 1916 Conscription referendum was lost Billy Hughes' coalition government was re-elected by a large majority, and Hughes himself continued as Prime Minister until 1923.

A debate about principles?

At one level the conscription debate was about fiercely-held principles - duty, loyalty, liberty and upholding national 'honour' versus the right of the individual to choose whether to fight, and the concept of 'equality of sacrifice'. The 'Yes' side claimed a monopoly on duty and loyalty, arguing that those loyal to their country and the Empire had a duty to fight in its defence and to support conscription. They laid particular stress on showing loyalty to those already at the front. This presented 'No' supporters with a real dilemma, since no-one wished to be branded disloyal. It was the weakest point in the 'No' case. The response that their loyalty was strongest to their fellow workers was only a partial answer and some unionists rejected it outright.

However both sides could argue in the name of 'liberty'. 'Yes' campaigners claimed that their support of conscription was intended to ensure the defeat of tyrannical 'Prussianism' (also often described as 'militarism'). They were quick to point out the limits to democracy in the Kaiser's Germany, especially to women voters. But 'No' campaigners countered that conscription was itself 'militarism', the ultimate form of state tyranny, depriving a man of the right to choose whether to fight and die. Anti-conscription literature and caricature made much of the threat to Australian liberty and democracy implicit in conscription. As the campaign wore on, and the Hughes' government became increasingly repressive, there was ample evidence to support this view. The 'Yes' side often claimed that conscription was necessary to preserve Australia's 'honour' in defending the Empire.  As casualty lists grew and voluntary enlistments slowed, Hughes and others feared that it would be impossible to maintain Australia's divisions at the front, reflecting poorly on the country and questioning its courage. Hughes in particular laboured this point. In his 1916 Manifesto, aimed especially at women, he demanded: 'Will you be the proud mothers of a nation of heroes, or stand dishonoured as the mothers of a race of degenerates?'  Men who disregarded the call were described as 'decadent' and 'unworthy' 'shirkers'.

'No' campaigners countered that the burden of the war already  fell disproportionately on working people. Stagnant wages, rising prices and unemployment, all undermined the ability of workers to support themselves and their families. Working women deprived of husbands and sons faced almost certain poverty. Some claimed that it was impossible for a woman to manage on a wife's share of a serving soldier's pay.  As one woman chanted repeatedly at a pro-conscription meeting in Kensington in 1916: 'You tell us how to live on 30 bob a week and we might listen to you.' Against the reality of the daily struggle to feed a family, the nation's honour seemed an abstract concept.

At another level the bitterness and violence of the conscription campaign reflected deep divisions within Australian society. The labour movement had a long-standing ideological commitment to the principle of free choice, but its passionate stance against conscription also expressed all of the accumulated frustration and anger of class-based conflict, which wartime conditions had exacerbated.  The defeat of the 'Great Strike', and the failure of government to respond to community anger at rising prices and food shortages, deepened the sense of class betrayal.

Sectarian divisions were also apparent. The Catholic Church, which took no official stance in 1916, began to align more strongly with the 'No' vote in 1917, especially under the influence of the charismatic Catholic Archbishop of Melbourne Daniel Mannix (see image). Mannix addressed huge gatherings in 1917, urging the faithful to vote against conscription. While it is impossible to know how Catholics voted, Mannix is thought to have been one of the influences behind Victoria's rejection of conscription in 1917, after (narrowly) supporting it in 1916. Hughes certainly thought so.

Communal differences probably played some part in increasing support for the No' vote in 1917 also. Irish Australians were a sizeable minority in the Australian population during the First World War. While their politics varied, (not all necessarily supported Home Rule,) historians have speculated that events in Ireland, especially the brutal repression by the British Government of the Easter Rebellion in 1917, may have hardened Irish opinion in Australia against the war. 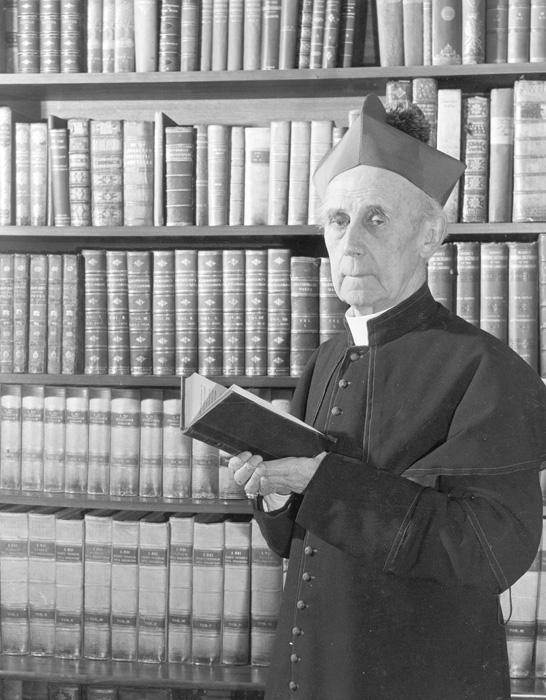 Although Hughes promised a free vote on conscription, wartime censorship laws were soon used against the 'No' campaign. The labour press was subjected to tighter and tighter censorship and there were military raids on the premises of the Trades Hall Council in Melbourne.  Leading unionists and socialists were routinely followed and their correspondence monitored. Plain clothes policemen monitored activities at anti-conscription meetings and demonstrations, noting any 'inflammatory' remarks, or the singing of 'revolutionary' songs. These laboriously hand-written accounts still survive in the archives. Unionists observed this undermining of their right to free expression and right of assembly with growing dismay, but concern was not limited to the left. High Court Judge H.B. Higgins was one moderate progressive who viewed the growing use of state powers against free expression with alarm. He returned a partial dissenting judgement  in the High Court hearing of Adela Pankhurst's challenge against her conviction in 1917, (the other judges, who upheld the conviction, were Isaac Isaacs and Edmund Barton,) warning: 'the greatest care is needed to watch attempts to extend the limits of the defence power.'

The greatest coercive power of the state was levelled against the Industrial Workers of the World (IWW), who were seen as subversive and dangerous.  Hughes seems to have hated the Wobblies with a passion and was determined to break them completely.  Their premises were raided, presses seized and members goaled. Later the organisation itself was banned.  By the end of 1916 most of its members were either in goal or deported, and they played little effective part in the campaign in 1917.

Australia's vision of itself as a progressive democracy was profoundly tested during the Great War. Over zealous censorship, the routine surveillance of those opposing the government's view on conscription, and even imprisonment on flimsy charges, were deeply resented by the labour movement and alarmed other observers. There was a growing sense that the Hughes Government had gone too far in its use of wartime regulations. In the end such coercive tactics may well have undermined the pro-conscription case.

Perhaps the most astonishing aspect of the conscription story was the final outcome. Despite all the odds, the people of Australia voted 'No' - by a narrow margin in 1916 it is true, but then by a more decisive margin in 1917. From the beginning the 'No' case faced formidable odds, which only increased as time went on. The Australian Government, the daily press, most church leaders, the Liberal Party, most local councils and many influential community organisations combined to put the 'Yes' case using every resource at their disposal. Lurid posters and full-page advertisements painted a graphic picture of the threat facing Australia should Britain lose the war. Against this barrage of propaganda the labour press was puny indeed. Although its propagandists produced compelling posters and cleverly-contrived cartoons, they were swamped by the sheer might of the opposition - their articles censored, their meetings banned or broken up, in some cases their presses seized. And yet their message apparently found accord with enough of the Australian people to win the day.  Voters made up their own minds and cast their ballots accordingly. A victory for democracy

In the end it was also a victory for Australian democracy. By 1917 the Hughes Government had a clear majority in both houses of the Federal Parliament. It could have chosen to disregard the referendum result and legislate to introduce conscription, but it did not. The will of the people prevailed and the Australian Imperial Force remained entirely voluntary.