Adela Pankhurst was born in 1885, the third daughter of the famous English suffrage campaigner Emmeline Pankhurst and Richard Pankhurst, barrister-at-law. She followed her mother and sisters Christabel and Sylvia into the campaign for the suffrage, working as a paid organizer for the society they founded, the Women's Social and Political Union. Her exposure in Yorkshire to the living conditions of working class women prompted a life-long commitment to improving conditions for working women and children, initially through women's suffrage. Adela became a radical suffragette and was imprisoned on several occasions as a militant, before poor health forced her to withdraw from active campaigning. In the following years she became estranged from her family and in 1914 migrated to Australia. 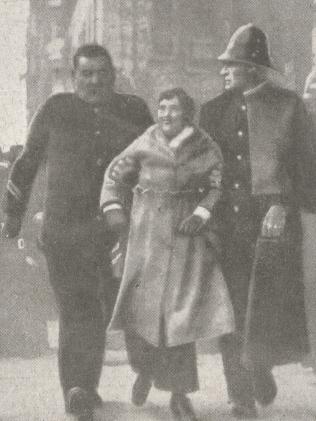 Pankhurst arrived in Melbourne in April 1914 and found work as an organizer with Vida Goldstein. She joined the Women's Political Association, the Victorian Socialist Party and, from 1915, the Women's Peace Army. With Vida Goldstein and fellow suffragette and socialist Sarah Jane (Jennie) Baines, she campaigned against the war and against conscription. She was soon recognised as their best speaker. Despite her diminutive size (she was just over five feet or 152 cms tall,) she was a forceful speaker and a fearless organizer, repeatedly defying the ban on public gatherings imposed during the conscription debates in 1916-17. With Jennie Baines she led mass protests against rising wartime prices and food shortages, arguing: 'it is sinful to waste, to fill storehouses with meat and wood, and warehouses with clothes and boots, while human stomachs are empty and human bodies want clothes'.

As the war entered its third year there was growing anger in Melbourne at spiralling food prices, especially as wages had been frozen at the start of the war. Despite promising action, the Australian Government did nothing to control prices or to prevent war profiteering. There were many spontaneous protests in the city and nearby suburbs, as women in particular were moved to political action. In August 1917 Pankhurst led an estimated crowd of 15,000 women from the Treasury Gardens to Parliament House, chanting 'We want food and fair play' and singing the socialist song 'The Red Flag'. As police moved in to break up the rally they were pelted with gravel and many windows in the city were smashed. Pankhurst and others were arrested and charged with offences under the War Precautions Act 1914 and Unlawful Associations Act 1916. She was sentenced to prison and spent several months in Pentridge. There is no doubt that Pankhurst was a thorn in the side of Prime Minister Billy Hughes, who described her as a 'damned nuisance'. There were rumours that he planned to deport her.  Nevertheless he offered to release her from prison on condition that she did not speak in public. Pankhurst refused and despite a petition signed by many thousands of people, she remained in Pentridge until after the second conscription ballot was held in December 2017. Just before her imprisonment she married fellow activist Tom Walsh and on her release in January 1918 they moved to Sydney. Both continued as activists.  They had five children together.