The case for Conscription was put most powerfully by the Australian Government, backed by almost all of the major newspapers, the Liberal Party and most church leaders. Some specific organisations, like the Universal Service League (formed in September 1915), acted as lobby groups in favour of conscription, along with other conservative organisations like chambers of commerce, and women's groups like the National Council of Women and the Australian Women's National League.  Most local councils were also pro-conscription. As the debate became more bitter, local government often restricted the use of its halls and meeting rooms to those supporting the 'Yes' vote.

The main point of conscription was the need to make up for flagging enlistments and provide adequate reinforcements for those at the front.  Estimates of the need varied and Hughes was accused by some of exaggerating the number required. Some estimates suggested that 5,000 men were needed each month.  Others said 7,000. Either way, it was a terrible reflection of the cost of the war.

Duty, honour, loyalty and the defence of 'liberty'

Pro-conscription speeches and propaganda appealed to a sense of duty, honour and loyalty - to the country, the Empire and the men already serving at the front. There was a sense that men who opposed conscription were 'shirkers', joining those who refused to volunteer in letting down 'our boys' in their hour of need. British 'liberty' was said to be threatened by the brute hand of 'Prussianism', which stood for military force and the denial of democracy. There was more than a hint in pro-conscription propaganda that those supporting the 'No' case were disloyal to their country.

The power of the image

Central to pro-conscription propaganda was an especially graphic caricature of the enemy. Germany was presented throughout the war as the rapacious 'Hun', trampling liberty underfoot and murdering innocent women and children. Those who opposed conscription were said to be playing into the hands of the enemy - aiding the hated 'Kaiser' in his militarist ambitions. There were many dark references to the 'enemy within'. This was an elastic concept that varied over time, but could include those opposed to conscription as well as German Australians, socialists, the Industrial Workers of the World and peace activists of various persuasions. 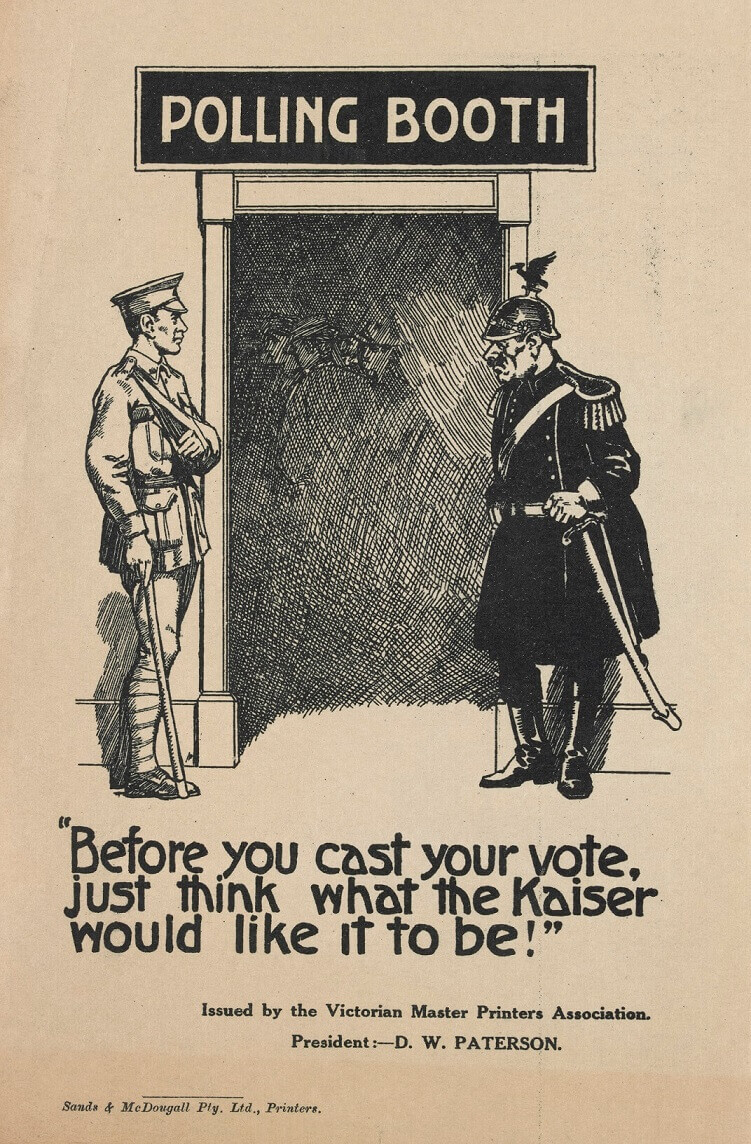 The case against Conscription in World War I | Read more

Joy Damousi 'Universities and Conscription: the "Yes" Campaign and the University of Melbourne', in Robin Archer et al The Conscription Conflict and the Great War  Melbourne, Monash University Publishing, 2016, pp. 92-110