The bullock-driver, with his long team and heavy load is a very harmonious feature in the Australian landscape. The ‘bullocky,” as he is universally called, is certainly an easy-going individual. But while he never appears to be in a hurry, his life is not the lazy one that some people may imagine. Seen on the road, walking with long, slow stride, and looking as if he had no cares at all in the world to worry him, it is not realised what work he has had before and after getting his load on. With the team moving lazily onward, his whip resting obliquely over his shoulder, it does apparently look as if he has nothing to do but to keep up a walking pace with his bullocks. But only apparently; it takes a good man to make his entire team pull together. His eyes have to be ceaselessly on them. This Is where a good dog is of great assistance. Commencing at the hindmost off-side bullock, the dog will make a bite at his heel, and then with lightning speed to that of the one in front, following up to the next along the line, and so on. He then wheels back, dodging dextrously in and out between the wheels, with only a bare inch or so to spare from being crushed to death. With lolling tongue he is evidently enjoying the whole proceedings. The bullocky is sometimes accompanied by a mate, who walks on the off side of the team, keeping the off-side bullocks up to their work He is known as an “off-sider,” a term that is also applied to the shearers’ cook’s assistant. -Sydney Morning Herald, 4 June 1910 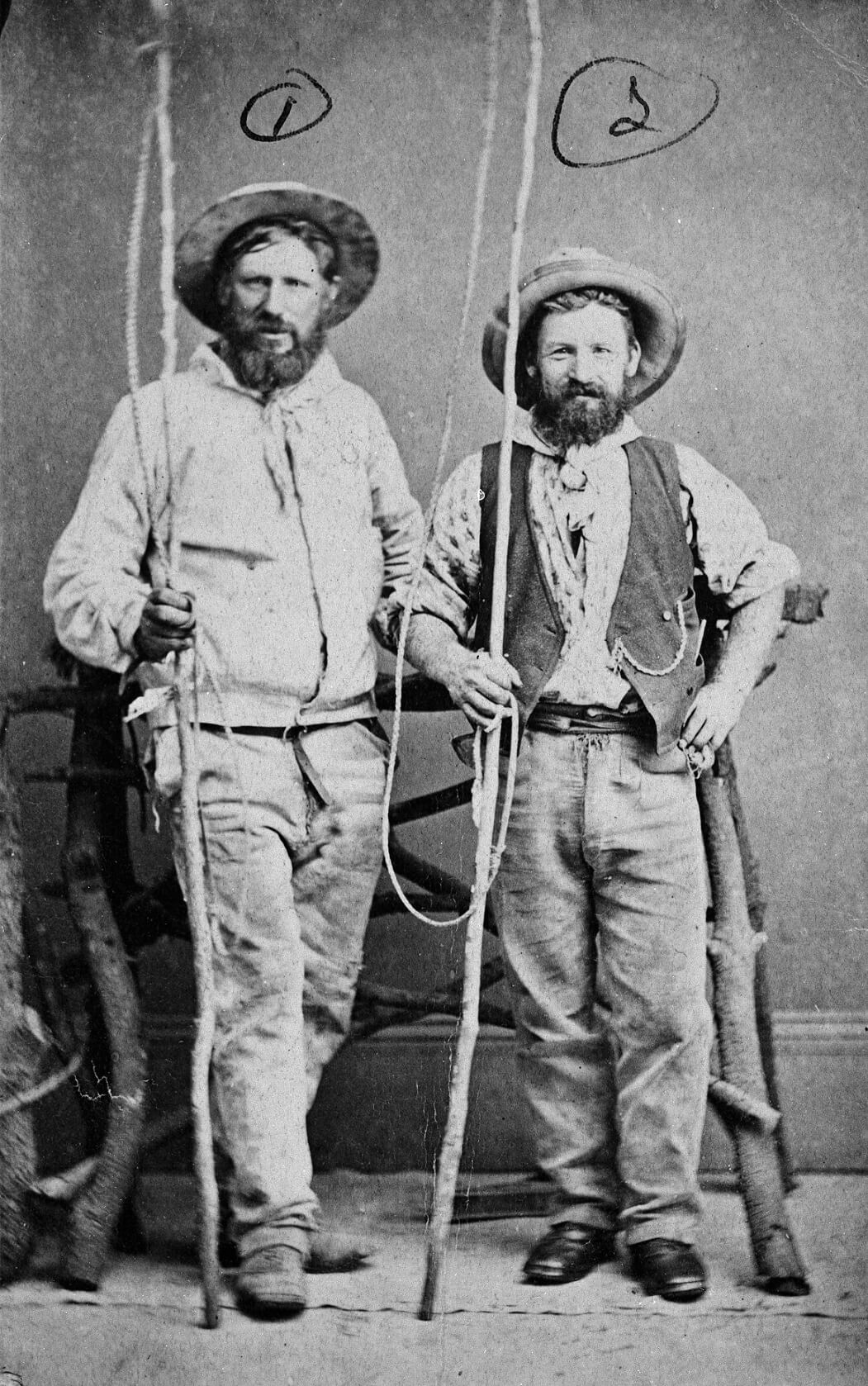 Bullock drays were a familiar sight in Australia in the nineteenth and early-twentieth centuries. The slow, labouring bullocks were the backbone of Australia's colonial workforce, transporting heavy goods such as wool, wheat, timber, farm equipment and building supplies, even houses!  During the gold rush bullocks were the main carriers, each team carrying up to three tons of goods in summer. They plodded along the roads, the driver walking beside the dray with a veil on his face to fend off flies and dust. 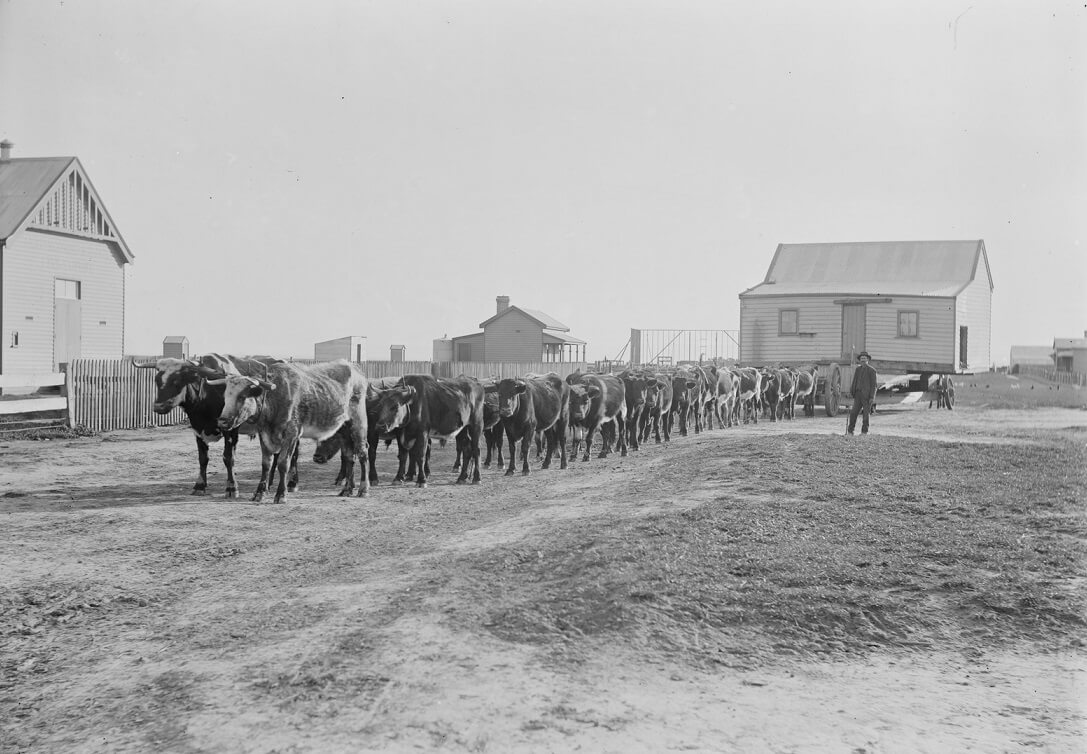 Bullock teams travelled about 15 kilometres per day, and teams ranged from 12 to as many as 30 bullocks. Often preferred over horses for heavy transport, bullocks were sure-footed even in rough terrain hauling huge loads across mountains and rivers. Whilst horses needed specialised fodder, bullocks browsed on the roadside.

By the 1860s the railways took over heavy cartage, but bullock teams continued to transport goods to and from the railheads. They were still in use in the 1950s, in the timber industry and on farms. A good bullocky has perfect command over his team. Anybody can drive a horse; but it is not everybody who can drive bullocks. It is solely by the “holt” and the movement of the whip that they are handled. -Sydney Morning Herald, 4 June 1910 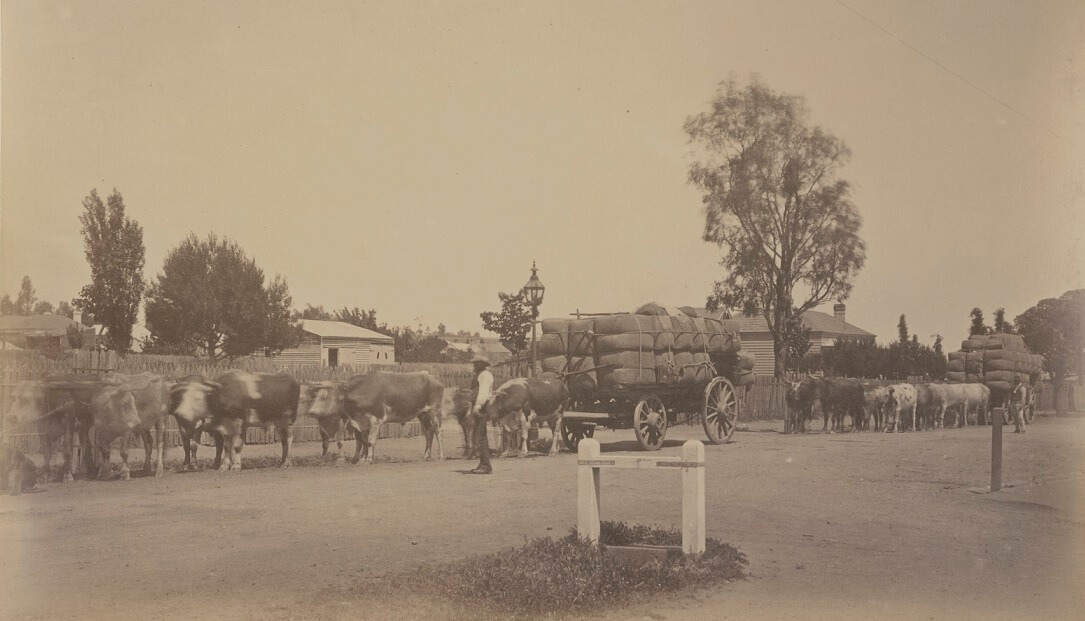 Wearing garments stained by sap and mud, the “bullocky” and his off-sider were having their lunch by the side of the road, when I saw them.

Lean, hard men, with sun-tanned faces, they follow a strenuous life, juggling with forest giants in all weathers. A bogged timber waggon is no joke, and the men who follow this life must of necessity be strong and enduring, speaking a picturesque language – the only sort a working bullock understands. -Sydney Morning Herald, 26 June 1937

Bullockies, in their heavy boots and cabbage-tree hats, were highly skilled workers. They guided the bullocks with word and gesture, reserving the long whip to urge the team though heavy-going terrain. A dog was the bullocky’s best friend: ‘He plays no small part, and a good cattle dog is as invaluable to a bullock-driver as a sheep dog is to a drover or a shepherd.’

Bullockies earned a reputation for being rough and foul-mouthed, and frequently drunk. Occasionally drivers died, ‘crushed to death after falling from their drays in a drunken stupor.’

Bullock-driving was seen as a ‘man’s job’, but there were some exceptions. Agnes Buntine acquired a bullock team in the 1850s and supported her family, carrying goods from Melbourne throughout Gippsland. When gold was discovered at Walhalla in 1862, she was the first to arrive in the town with supplies. The next day she slaughtered a bullock to feed the miners.

Next- On the Road: The Nightman