Leeches have been used medically for thousands of years, dating back to ancient Greece and Egypt. Practitioners believed that ‘bloodletting’, the removal of blood, could prevent illness and cure disease. Leeches were attached on the skin of a patient to feed on their blood. ‘Leeching’ reached peak popularity in the nineteenth century, when it was prescribed for almost every malady — headache, toothache, even premenstrual pain. Such was the demand for leeches that they became endangered in several countries, including Britain and France.

Applying the leech — get ready to cringe!

To make the leech bite, practitioners placed the leech on the skin, holding it in place with a wine glass. A narrow tube, called a leech-glass, was used to affix the leech inside the mouth or inside the body. It was suggested a thread be tied to its tail as a precaution against it being swallowed. One hopes a similar precaution was made when attaching it to the cervix!

Once gorged with blood the leech would drop off. If it didn’t, salt was sprinkled on the animal or it was gently ‘squeezed’, releasing its bite. Leeches were applied to infants and young children as well: ‘three leeches, bleeding well, was considered a full bleeding for a child of one year labouring under acute inflammation.’

‘A strange trade is that of catching leeches, and a most unlovely one, for owing to certain peculiarities of the matter, it is literally blood for blood.’
-The Sydney Morning Herald, 27 December 1867

Gathering leeches was unpleasant work. Collectors would wade through muddy, swampy water attracting leeches to their legs and arms: ‘the leeches cling to the legs, and suck away; the men pick them off as fast as they see them, and put them into bags.’ Sometimes the leeches were ‘harvested’ by drawing nets with bait (usually the liver of a recently slaughtered animal) through the water.

The animals were observed until they began to tremble; when led out, their legs and bellies were covered with a slimy mass of leeches. Exhausted, the horses would stagger and fall on their sides. The leeches were removed and the horses allowed to recover in a neighbouring waste land for four or five days before becoming fresh victims. By the end of the season such a horse was so exhausted that he was considered difficult to sell. He was brought from the lake only long enough to remove the leeches, and then returned without being allowed to eat. Eventually the horse had not the strength to drag it-self out. In some animals the eye-lids had been observed covered with a thick layer of leeches. Finally, the owner had to drag the horse out of the lake. He scraped and re-moved the hide while the animal was still alive.

Leech collecting carried a high risk of infection and potentially serious blood loss. Collectors were often ‘attacked by ague, catarrh, and rheumatism; and if they indulge in strong drinks to keep off the noxious influences, they suffer for it in the end by disorders of other kinds.’ Another worry was the snakes that lived in the shallow waters where leeches were found.

The leech promises to become an article of export – 120,000 of these little creatures have recently been forwarded to London. If the London gouty aldermen cannot feast upon the dainty cod of the Murray, he can be depleted by the Murray leech. Some time since a large number of these were despatched to London, where they all arrived in good health and strong. An extensive merchant who deals in leeches in that city pronounced the samples sent as the very best of the kind, better than those had from the continent of Europe, where the supplies for London are obtained. The value of the Australian leech in the London market is estimated at… £5 per thousand. There would be no difficulty in sending 1,000,000 leeches annually to England, for the waters of the interior in the summer season are alive with these creatures. The manner in which they are dealt… for despatch, is worth knowing: each of them is cleaned singly and ”squeezed,” so as to rid it of all slime, and then put into blue clay, packed in a box. This cleansing process is indispensable to their preservation – without it the leeches surely die. There was an example of this the other day, when a novice in the business despatched some thousands of them to Melbourne, nearly all of which died.
-Courier, 27 August 1862

With demand for leeches outstripping supply in England and Europe, exporting leeches was a lucrative trade. Throughout the 1860s one leech merchant, Negus and Co., in Collins Street Melbourne exported hundreds of thousands of ‘Murray leeches’ annually to Europe and America. The Murray leech was preferred by the medical faculty. Its bite was smaller and it left no mark on the skin.

In the 1870s prominent businessman, Frederick Grimwade, contracted Aboriginal communities in Echuca to supply him with Murray leeches at 10 shillings per thousand. Collectors waded into infested water allowing the leeches to attach, collecting as many as 2,500 per day. The leeches were sent to Grimwade’s ‘Leech Aquarium’ in South Melbourne, then shipped to Europe and America, selling for three times the local price.

In the early twentieth century bloodletting fell out of favour and the leech craze was over.

Interestingly, leeches are again used today in surgery to help heal skin grafts and restore blood circulation to wounds. Their usefulness is no longer attributed to the amount of blood they can withdraw, but to an enzyme in their saliva which prevents clotting. Leeches are supplied by specialised 'leech farms' that ensure they are raised in special, sterile conditions and harvested humanely. 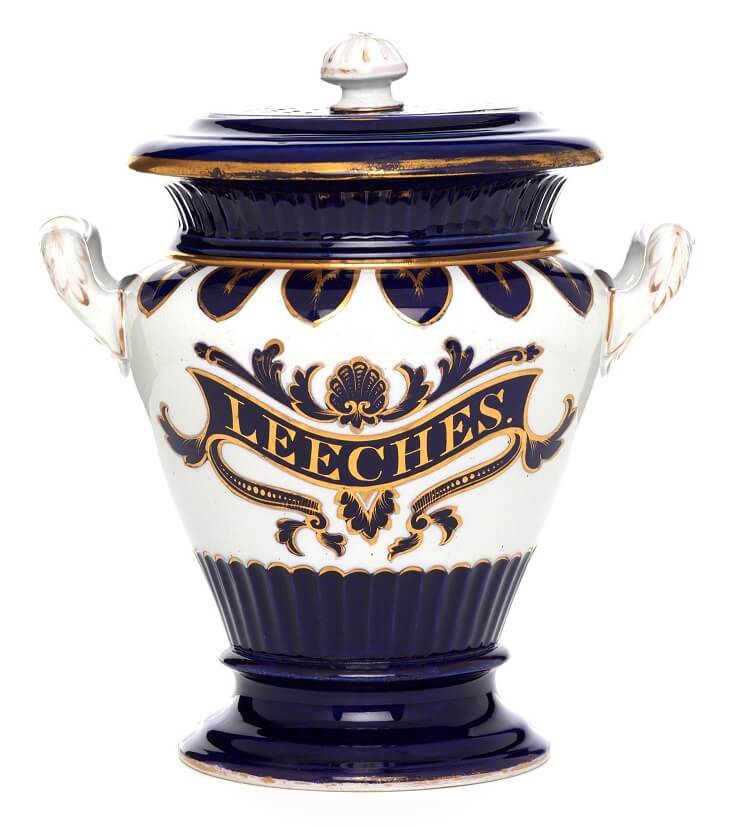 Fresh, healthy leeches were readily available in most nineteenth-century pharmacies. The leeches were kept in glass or earthen-ware jars like this one here. The jars were filled with clean rain or soft water with the bottom covered with some moss and loose pebbles.

Pharmaceutical literature gave detailed descriptions of methods for keeping leeches healthy and ready for medicinal use.