Although the telegraph had an important impact on the world of business, it did not invade the office per se. Not so two other inventions of the nineteenth century — the telephone and the typewriter. Both soon had a place in every office, followed inexorably by the women who operated them.

The telephone arrived in Melbourne in the late 1870s, very soon after it was first patented in the United States. The first telephones were installed as private lines between business premises, but a general telephone company opened for business in 1880, only two years after the first exchange opened in America and before even London’s first service was established. Historian Don Garden argues that bustling Melbourne liked to see itself as a modern, progressive city at this time, in touch with all the latest technological inventions. The telephone was just one of many inventions exciting interest in the closing decades of the nineteenth century. In common with many innovations, the first telephone service was provided by a private company, the Telephone Exchange Company, and business grew quickly. By 1881 there were 128 subscribers. But providing telephone services required a great deal of infrastructure, and it soon became apparent that private companies would struggle to provide it. By 1887 the telephone service had been taken over by government, managed through the postal service. Thereafter it expanded quickly: by 1890 there were 1,914 subscribers in the Melbourne area, with links in Geelong, Ballarat, Bendigo and Warrnambool. On Federation the provision of telephone services was transferred to the Commonwealth, administered through the Postmaster General’s Department.

Early telephones came in a range of styles. 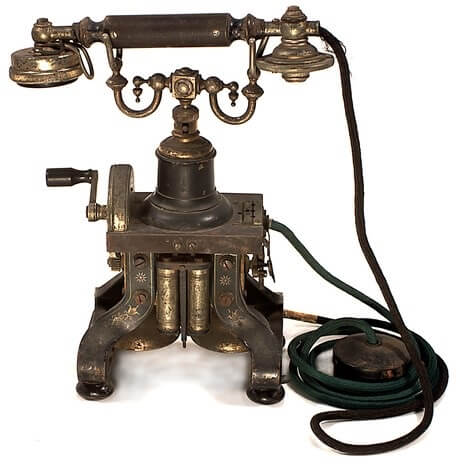 This handset was used in the head office of the Victorian Government Department of Mental Hygiene, c. 1900. At first every individual call had to be connected manually via a telephone switchboard, usually called an ‘exchange’. A caller connected to the exchange, asked to speak to a person or a number, and was connected by the operator. At that point the operator was supposed to disconnect from the call, but it swiftly became a well-known trope that the telephone exchange operator was always the best informed in any district.  From the beginning the exchanges were staffed by women, who were employed as telephone switchboard attendants. The fact that they were usually women undoubtedly helped to fuel the reputation of the switchboard attendants as gossips. It also ensured that the job was classified as women’s work, at a low rate of pay and with little opportunity for promotion. Nevertheless, there was always a demand for the work, which was undoubtedly more appealing than working all day in a shop, although it is evident from pictures of the early exchanges that telephone attendants were also expected to stand. The first exchange was small, as Julian Ashton’s engraving of the 1881 ‘telephone room’ (above) reveals, but it expanded quickly as the number of subscribers increased. As the number of subscribers grew, it became more challenging to connect each individual call. By 1911 there were 23,504 private subscribers and 500 public telephone boxes. Although many of these were concentrated in Melbourne and the larger towns, rural properties also installed telephone lines, even if some were rather makeshift. Melbourne and Sydney were connected by telephone in July 1907 and other capital city connections followed.  In July 1912 the first automatic telephone exchange opened in Geelong, but the manual exchanges continued in use in some country towns for many years after that.

The telephone quickly became an essential tool of business and soon there were so many telephones installed in larger business premises that they required their own switchboards to manage the volume of calls in and out. Women generally managed these switchboards too. They continued in use until the late-twentieth century, but from the 1980s were increasingly replaced by computer-controlled exchanges, throwing many switchboard attendants out of work. The first computer-controlled exchange opened in Melbourne in 1981. In many offices these systems could be managed by one receptionist/telephonist, who also welcomed any visitors to an office. The image was published in the Sunshine Review, September 1949 with the following caption: ‘SUNSHINE PERSONALITIES. MISS JOAN HOWARD IS ONE OF THE YOUNG LADIES WHO ATTEND THE SWITCHBOARD AT HEAD OFFICE, SUNSHINE’.

Next- In the Office: The Typewriter