As a proportion of the overall workforce, white collar work really took off after the Second World War, but it was still a force in the city in the nineteenth century. Gold rush prosperity saw Melbourne emerge as the banking and finance capital of Australia in the mid-nineteenth century, a position it held until the 1980s, and the number of commercial and banking premises constructed in the city in the second half of the nineteenth century attested to the prosperous state of commerce. Melbourne’s financial dominance was one major reason why Melbourne was chosen as the temporary national capital after Federation. This continued until 1927, and longer for some departments. White-collar workers travelled in and out of the nineteenth-century city from surrounding suburbs by train, horse-drawn omnibus and later trams, and the city began to assume the daily rhythm that would continue for the next century and beyond. After the Second World War the number of white-collar workers expanded exponentially, as administration in government and business became ever more complex. New jobs emerged too, in ‘personnel management’, (that soon became ‘human relations’), advertising, media and marketing. A higher proportion of office workers became ‘managers’ and the humble ‘clerk’ all but disappeared.

The office was always a more predictable source of employment than blue-collar jobs like day labour on the wharf, or the building trade, but it was still sensitive to economic fluctuations. Major economic recessions could and did throw many out of work, with little warning.

Serious economic downturns affected Victoria periodically, but there were especially serious depressions in the 1840s, 1890s, 1930s and 1990s. Political crises could have serious consequences for white collar workers too. Many senior public servants were summarily sacked on ‘Black Wednesday’ 9 January 1878 in the fallout from a bitter stoush between the two houses of Parliament. One of those who lost his job on this day was JJ Clark, designer of the Old Treasury Building, who was then a senior architect in the Public Works Department. Unlike some, he was not reinstated and was forced into private practice.

Government responses to economic depression seldom prioritised the welfare of their public servants. In the 1890s many employees were dismissed, despite the serious impact this had on the individuals concerned, or indeed, on the overall economy.  In the 1930s fewer public servants faced actual dismissal, and although wages were cut, many retained their jobs. For decades afterwards cautious families tried to place their sons (and perhaps their daughters) in public service jobs, which were thought to be ‘safer’, even though they paid lower wages than the private sector.

Other national disasters could have an equally devastating impact on white collar employment. As the full impact of the ‘Spanish flu’ (influenza epidemic) of 1919 became apparent, many workplaces shut their doors and sent their workers home, leaving thousands without wages for weeks, or even months. In an eerie repeat of this earlier pandemic, the impact of COVID19 was equally swift, although by this time government was more inclined to provide some measure of support for those who lost their jobs and for impacted businesses. But still, overnight offices emptied as workers were asked to ‘work from home’. Office towers stood empty, public transport ran without patrons, and city streets were abandoned, as frightened workers stayed at home to avoid infection. Before COVID the laneways of Melbourne were crowded with shoppers, office workers and people dining on pavements. Thankfully many could now do so, assisted by the almost-universal adoption of home personal computers, the internet and email. The use of online meeting platforms like Zoom and Teams proliferated, with Zoom reporting that its number of users increased from 10 million in December 2019 to over 300 million in April 2020. This spawned its own brand of humour. 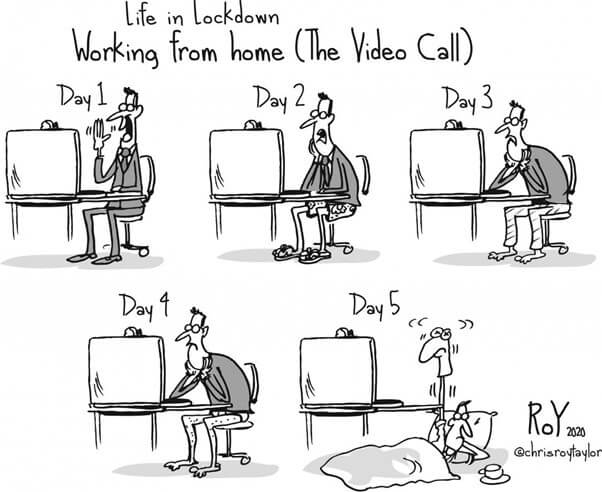 In a moment of revelation however, business discovered that their workers could, in fact, maintain a fair level of productivity when based at home.

So, what does the future hold for the office? While there are some office workers who yearn to return to the personal contact of shared office space, others have discovered the convenience of working from home, freed from the pressure of a long daily commute. Families have found it easier to juggle the demands of work, school and childcare, despite the fact that months of home schooling tried the sanity of many. Women in particular appreciated receiving more assistance from their partners with daily routines, although this was not always a given. It seems likely that employers will need to take issues of ‘family-friendly’ working conditions, and concepts of ‘work-life balance’ (an increasingly popular concept in the twenty-first century) into careful account in determining how they negotiate future employment conditions. It may be that ‘the office’ becomes as much a virtual as a physical space in the future.