Any day any suburban street, and most of the city thoroughfares, are littered with

dirt and rubbish. Tram tickets, bits of paper, horse manure, and dirt are every-where. The macadamised roads are friable under the traffic, the wheels of which grind out a little more dust each time a vehicle goes by.

By the late-nineteenth century there were thousands of working horses in Melbourne, with inevitable consequences. It was estimated that over an eight-hour working day, 1,000 horses deposited 2,200 litres of urine and 10 tonnes of manure onto the streets.  Young boys, aged 14 to 18, were employed by the Melbourne City Council to collect the horse droppings before they dried and scattered. Officially called ‘orderlies’, they were known as ‘Scoop-boys’, ‘Broomies’, ‘Sweepers’ or ‘Block-boys’.

By 1910, some 50 boys were employed by the Melbourne City Council. ‘Broomies’ or ‘sweepers’ were paid about £1 per week; the ‘scooper’ or ‘picker’ received 15 shillings. Juniors with less than 12-months experience got 12 shillings.  Many working-class families eagerly sought the work for their sons, and promotion was possible. The Age newspaper described a Broomie in 1917 who began as a ‘picker’, but ‘in the course of two years advanced to the sole charge of a hand broom and a length of street channelling, at 27/6 a week.’

‘…their refusal to work ransomed the sanitary and civil stability of the city.’ - Historian, Andrew May

In an enviable position of power, the boys regularly went on strike. In 1906 the Argus reported:

It was dusty enough, but to add to the discomfiture of the public yesterday morning the streets of the city had to go without their usual cleaning…  the demon of discontent had suddenly entered into the ranks of the street-cleaners, and, with no warning whatever, they threw down their brushes and pans and went on strike.

It was mostly the ‘pickers’ who went on strike. As one ‘small boy’ explained: ‘“It’s too risky a job for 15 bob a week…When you go to sweep sometimes a horse is right on top of you.”’ And the job did carry some risk. On 4 May 1888 an orderly fractured his leg when run over by the Hotham Horse Bus. In 1904 David Wilson was ‘jammed between two wagons’ and George Hendy was run down by a delivery cart when working the corner of Collins and Elizabeth streets.

The institution of crossing-sweepers is, under proper regulations, a useful one, but there is a danger of it becoming a nuisance to the public… - The Argus, 25 July 1878

The ‘scoop boys’ sometimes got up to mischief, with reports of them leaving their block early, begging for money, even drinking on the job. According to historian, Andrew May, one favourite ‘lark’ was throwing refuse into open carts and cars, provoking an outcry from some citizens. But despite the complaints, ‘scoop boys’ performed a valuable service, working well into the 1920s. Their function disappeared as cars replaced horses. 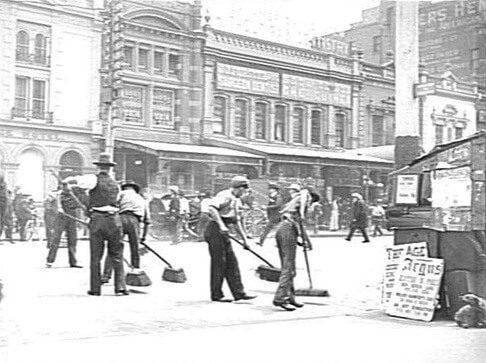 All children need careful supervision – the street child needs it ten times more than the other – but there is none exercised at all. His health may be shattered by vicious habits while a child, his morals depraved, and he is left to do as he likes until the policeman finds him committing some breach of the law. The young vagrant is invariably of street manufacture.

The manner of life of these young persons promises badly for their future welfare, and there can be no question that a very large proportion of young people left like these without proper parental control go completely to the bad and finally join the multitude who live by vice and crime. If there is a possible remedy by legislative means… its application is urgently needed, for year by year the evil is increasing.

Superintendent Sadlier, quoted in the ‘Children on the streets of Melbourne’, Mount Alexander Mail, 20 November 1886

If there be anyone who still doubts the necessity for regulation of street traders, a little investigation would soon dispel his doubts. He need only consult shopkeepers in certain parts of the city whose places of business are open during the evenings; or Children’s Court officers and other social workers who come in touch with boy life; or police who are on beat duty in the city during the late afternoon or evening. The inquirer would speedily ally himself with those who, with the best interests of young people at heart, say that the sooner the Street Traders Bill is passed into law the better will it be for the community.

In response to the ‘child rescue movement’, government legislation gradually addressed the issue of children working on the streets, or outside the home. Following the 1887 Neglected Children's Act, all children employed under the age of 13 (school-leaving age) had to be registered with a certificate from a school inspector or headmaster confirming the child had been educated. The Act amended the definition of ‘neglected child' to include any child 'engaged in casual employment after 7 o’clock in the evening’. All ‘neglected’ children were made wards of the state.

In 1900 Daniel Duggan MLA introduced the Street Frequenting Children’s Restriction Bill, designed ‘to restrict and prohibit Children under the age of Fourteen Years being in the Streets after Nine o’clock’. Under the terms of the Bill, any child not accompanied by a parent or guardian and found in any ‘street road thoroughfare or highway’ after the stated hour would be fined 10s on the first occasion and £1 for subsequent offences.

Of course, some young street traders and their families resisted the change. As historian Simon Sleight puts it:

Not only did restrictions upon their earning capacity affect their household economies, but the gradual turning of the screws also brought with it diminished potential for autonomy. And in a cruel twist, the restrictions placed upon young people’s abilities to gain an income on the city streets occurred just as new leisure spaces and forms of commercial amusement opened up with them in mind.

Next- On the Street: Lamplighters

Next Topic- On the Track