The history of household cleaning follows a similar trajectory. At first the implements available were few and all were reliant on muscle power. Floors were swept, washed and polished (on hands and knees), furniture dusted and polished, and lamps cleaned and trimmed. The war on dust was a constant trial of the housewife in Melbourne, a notoriously windy, dusty city. And the arrival of electric lighting was not always welcomed, since its bright light only highlighted the dust and smears! Fireplaces also had to be swept and fires re-laid daily while in use: stoves were cleaned and polished. Removing dust from floor rugs was especially difficult. While there were various recipes for dust removal, (one involved scattering damp rose petals and then sweeping them up, bringing the dust with the petals;) the most common method was to hang the rugs outside and beat them with a carpet beater to drive out the dust. Carpet beaters were serious implements and beating carpets was heavy, dirty work. Housewives or domestic servants who did these jobs had no need of a daily work out in the gym! There is some evidence that commercial carpet beaters could also be hired in for the day, especially where a household owned large carpet squares. Each of the maids holds an item, probably representing different tools of trade. The servant at top left holds a scrubbing brush.

Beating carpets by hand was time-consuming and disruptive and it is not surprising that inventors turned their minds to devising alternatives. The mechanical carpet sweeper was the result. It was manufactured in the United States from the 1880s and soon made its way to Victoria. Rollers pushed over the carpet picked up dirt which was stored in an attached container to be emptied later. Carpet sweepers were largely superseded by vacuum cleaners, but many households retained them for quick cleanups well into the 1970s. The carpet sweeper pictured was purchased in about 1925.

But it was the electric vacuum cleaner that really made cleaning easier. The first models to use suction to remove dust were invented in 1901, but at this stage were large, industrial-scale machines that went door to door. Domestic-scale vacuum cleaners soon followed, including the popular ‘Hoover’ models. ‘Hoovering’ swiftly became a verb in households in the British Empire. Like many domestic appliances, vacuum cleaners were luxury items at first, but became increasingly common in Victorian homes after the Second World War. Electrolux began making vacuum cleaners in Melbourne in 1936, joining Hecla and other local manufacturers. Vacuum cleaners were also sold door-to-door, with time payment options, which no doubt increased sales. 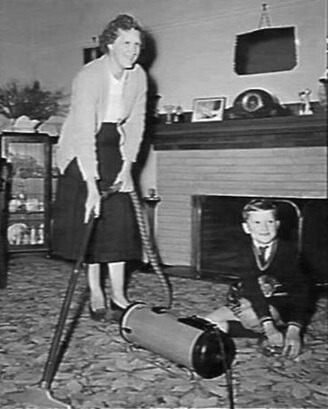 Note the patterned carpet, which is fitted wall to wall, a style made possible by the new vacuum cleaners. The vacuum cleaner is in a barrel style: others were produced in upright models.

Next- In the Home: Making and Mending